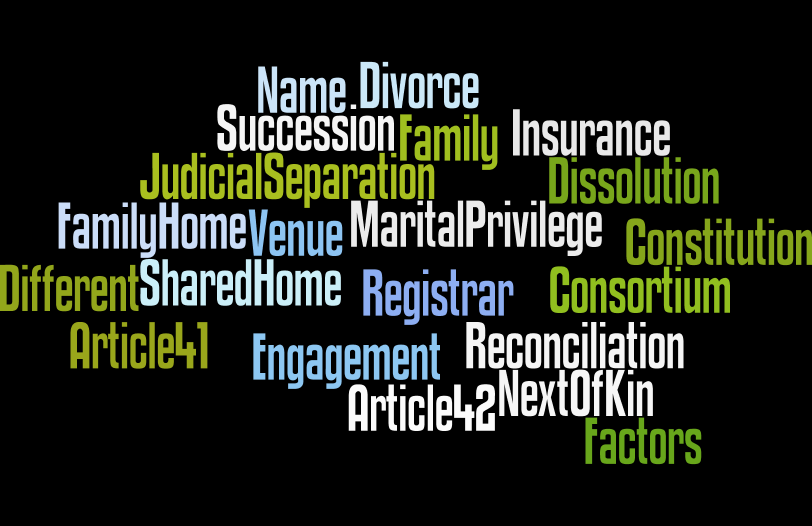 A claim regularly made in the marriage referendum debate is that civil partnership should be sufficient for same sex couples and that there is no need to extend marriage to same-sex couples. Civil partnership certainly provides extensive rights and obligations. It offers equal treatment with marriage, for instance, in the context of taxation, social welfare, pensions, citizenship, immigration, property, domestic violence, and maintenance.  Largely equal treatment applies in the context of succession (inheritance) and remedies following dissolution.  It delivered a number of vitally important, and in some cases urgently needed protections for same-sex couples.


Civil Partnership differs from marriage, however, in a number of respects. Many of these differences initially related to children being raised by civil partners, though most of these particular differences have been eliminated by the Children and Family Relationships Bill 2015.  Other differences in the original Act have been removed by legislation in 2011 and 2014.  Nonetheless, a number of differences remain. Here are a few of these:


This might appear trite. Yet, the very fact that a different name is applied to same-sex couples who formalise their union in itself implies that there is something fundamentally different about same-sex couples when compared with opposite –sex couples.  While the rules relating to civil partnership are very similar to those applying to marriage, the laws and procedures relating to each are contained in different places, and separate forms, precedents and procedures apply to each union respectively.


Civil Partnership does not attract the protection that the Constitution gives to marriage.  In particular, civil partners are not a ‘family’ for the purpose of the Constitution. The specific right of autonomy (freedom from state interference) afforded to spouses by Article 41 does not apply to a family made up of civil partners (though each partner has an individual right of privacy which is not as rigorously protected).


Different names are used for the home in which civil partners live – it is called a ‘shared home’ instead of the phrase ‘family home’, which normally applies to two spouses’ home.


A spouse who does not have an interest in the family home may not object to the disposal of the family home where he or she is in desertion. This rule does not automatically apply to civil partners in desertion though a court may potentially, at its discretion, dispense with the requirement for consent in such cases.


A person can sue for what is called ‘loss of consortium’. This arises where his or her husband or wife is injured as a result of another person’s wrong.  This right relates to the loss of the spouse’s company, assistance and the loss of sexual relations as a result of the wrong.  This entitlement is not available to civil partners.


A person has an insurable interest in their spouse. A person may also rely on and claim under a life insurance contract made by their spouse or parent where the latter took out the insurance for the benefit of their husband, wife or child. The corresponding position relating to civil partners is unclear.


Legislation that protects engaged heterosexual couples has not been extended to civil partners.


The rules relating to marrying relatives are different for civil partners when compared to married couples, in some cases more rigorous, but in most other cases less so.


To end a marriage, a court must be satisfied that there is no reasonable prospect of reconciliation.  Before papers are lodged for divorce, the solicitors for both sides must certify that they have advised their clients on alternatives to divorce. With civil partnership, by contrast, it is technically irrelevant whether the parties are reconcilable.  This signals that civil partnership is taken less seriously.


A person cannot be treated as a qualified cohabitant if he or she or his or her cohabiting partner is married to another person unless the spouses have living apart from their spouse for at least 4 of the previous 5 years. This restriction does not apply where a cohabitant has a civil partner.  The rights of cohabitants’ spouses are protected more rigorously than those of their civil partners in the cohabitation scheme.


Section 61(4) of the Bankruptcy Act 1988 states that “...no disposition of property of a bankrupt, arranging debtor or person dying insolvent, which comprises a family home within the meaning of the Family Home Protection Act, 1976, shall be made without the prior sanction of the Court, and any disposition made without such sanction shall be void.” This provision does not apply to the shared home of civil partners.
civil partnership differences between civil partners and marriage equality marref marriage same-sex couples

October 20, 2010
The UK Supreme Court has ruled that pre-nuptial agreements may be enforced in law, in appropriate cases. Katrin Radmacher and her husband, Nicolas Granatino married in 1998. They have two young daughters. At the time of the marriage, they agreed that, if the marriage failed, they would not seek financial support from each other. Radmacher, heiress to a German paper company, is reputed to be worth E120 million. Her husband, by contrast, gave up a lucrative post in an investment bank in 2006 for a more modest post as a researcher. Ms. Radmacher claimed that the agreement was made at the insistence of her father, who wished to protect her inheritance. She felt that the agreement also underlined that the couple were marrying for love and not for financial gain. For his part, Mr. Granatino claimed that at the time of the marriage, he was not aware of the extent of his wife's wealth. He asserted also that he had signed the agreement (which was in German) without the benefit o
Read more

(Speaking notes: Trinity College Dublin Politics Society and Q Soc Panel Discussion, Robert Emmet Theatre, TCD, 18 September 2018) It is important to open by acknowledging just how much legal and social progress the LGBT community has made in Ireland over the space of 30 years.   I was a student here in Trinity in the mid-1990s. At that stage, social conditions as well as the legal landscape were already improving for LGB people. [1] Nonetheless, we really could not have envisaged at that time that, 20 years later, we would have marriage via referendum or a gender recognition law based on a self-determination model.   Throughout the European continent too, there has been a sea-change in perspectives on LGBT people and rights, as reflected in European Court of Human Rights case law and in developments at EU level (such as the Framework Directive on Employment and Article 21 of the Charter of Fundamental Rights). It is equally important, however, to remember that this pr
Read more